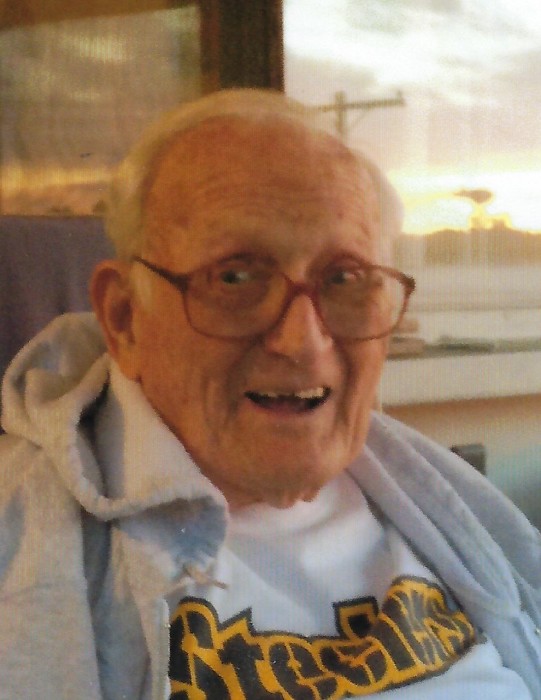 James M. Foster, age 92 of Port Vue, passed away on Thursday, October 4, 2018 at home surrounded by his loving family.  Born February 13, 1926 in Dravosburg, he was a son of the late Ellis and Anna Foster and stepson of the late Cecilia Foster.  A retired millwright for US Steel National Tube Works in McKeesport, James was a US Army Veteran of World War II and a member of Mentor Road Bible Church in Forward Twp.  In his spare time, he loved baseball (especially keeping score) and football and was an avid bird watcher and woodworker.  To his family, who called him "Happy Pappy," he was a generous, happy, and dedicated man who was always in a good mood and was the light of their lives.

Besides his parents and stepmother, James was preceded in death by his wife Janet E. (Thompson) Foster, who passed away December 7, 2011, and his siblings: Alma Duncan, Dolores Bandemier, and Ellis "Bud," Robert, and Fred Foster.  He is survived by his children Karen Savage of Liberty Boro, Debbie Wright of Port Vue, and David Foster of Port Vue; his grandchildren Lori (Ryan) Savage, Jennifer (Sabri) Keskin, Matthew (Emily) Savage, Heather (Larry) Wright, and Brian Wright; and also nieces and nephews.  Friends will be received in the Daniel F. Bekavac Funeral Home and Crematory, 4504 Walnut St., Versailles Borough, McKeesport, PA 15132 (412-678-3454) on Monday, October 8, 2018 from 2 to 4 PM and 6 to 9 PM.  A Funeral Service will be held in the funeral home on Tuesday, October 9, 2018 at 12 Noon with procession and burial with military honors to follow to Round Hill Cemetery, Elizabeth Twp.  www.bekavacfuneralhome.com