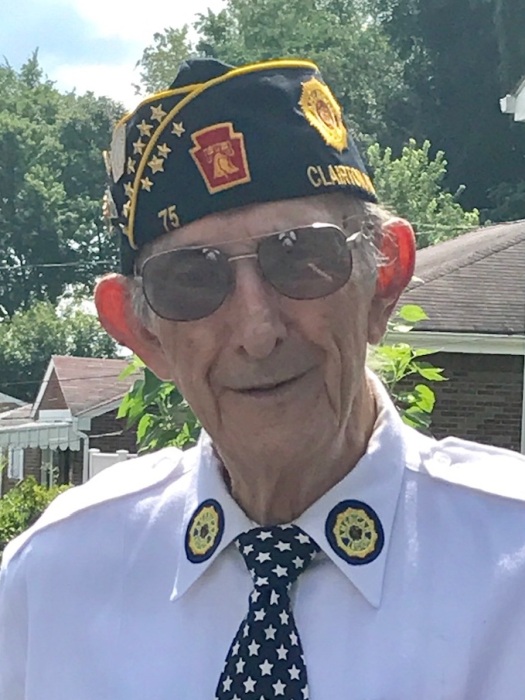 Raymond G. York, age 93 of Jefferson Hills, passed away on Thursday, March 4, 2021 at Allegheny General Hospital, Pittsburgh.  Born April 7, 1927 in Clairton, he was a son of the late Andrew and Rose M. (Lutheran) York.  A member of Triumph of the Holy Cross Parish – St. Clare of Assisi Church, Raymond received an associate’s degree from Carnegie Tech and retired as a draftsman for US Steel’s Clairton Works.  He was also a Veteran of both the US Navy and Army, serving respectively in World War II and the Korean War.  Raymond was very active with the Daniel Keffer Post #75 of the American Legion in Clairton, serving as its past commander, chaplain, and financial officer.  He also helped many times as a Scoutmaster for his sons’ BSA Troops when they were younger.  In his spare time, Ray enjoyed rooting on the hometown Steelers and Pirates.  He is survived by his wife of 69 years Rita (Belinski) York; his children Randall (Mary) York of Dormont, Monica King of Stow, OH, and Richard York of Pittsburgh; his grandchildren Jennifer York of Reston, VA, Maureen (J.W.) Johnson of Carnegie, Becca Tracy of Nashville, TN, and Brett (Lauren) Tracy of Seattle, WA; his great-grandson Beck Johnson; his sister Rosemary Armstrong of Syracuse, NY; and also nieces and nephews.  Besides his parents, Raymond was preceded in death by his brother A. Kenneth York.