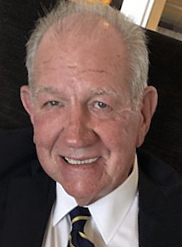 John graduated from McKeesport High School in 1958, received a football scholarship and played for the University of Southern Mississippi, graduating in 1962.  He received his Masters Degree and Principal Certification in 1975 from Duquesne University.

John proudly served as a Lieutenant in the U.S. Army from 1963-1965.  He was a valued member of the undefeated 7th Infantry Football Team in 1963 and was named 1st Team on the All-Army Squad.

From 1985-1992 along with Lou Washowich and Bob Irwin, he coached the McKeesport Little Tigers Football Team.

Since retiring in 2001, John enjoyed spending time with his four precious grandchildren and administering the Duke and Ding Scholarship Fund.

Due to the coronavirus pandemic, funeral services will be private and arranged by the Frank E. Campbell Funeral Chapel of Manhattan and the Daniel F. Bekavac Funeral Home and Crematory, 4504 Walnut St., Versailles Borough, McKeesport, PA 15132 (412-678-3454)  Burial will be at the Mt. Vernon Cemetery in Elizabeth Twp.  A public memorial celebration will be held in the fall.  Donations may be made in his memory to the Duke and Ding Scholarship Fund, 113 Cascade Drive McKeesport, PA 15135.  www.bekavacfuneralhome.com