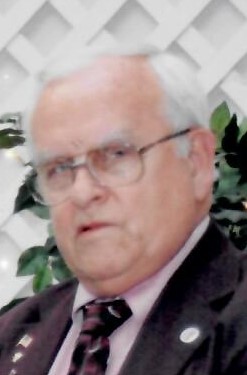 Raymond H. Shepherd, age 87 of North Huntingdon, passed away at home on Thursday, July 15, 2021.  Born June 24, 1934 in Coulter, he was a son of the late Plummer and Estelle (McLaughlin) Shepherd.  Raymond was a past Grand Knight of the Knights of Columbus, Council 955; a member of the Croatian Fraternal Union, #146 and member and past president of its Men's Club; a member of the Elizabeth Twp. Historical Society; and the St. Patrick's Holy Name Men's Club. He worked for thirty-five years as a railroad-man, employed by the B&O, C&O, and CSX Railways and receiving many awards.   Raymond also loved his family dearly, and devoted much of his time to helping them and others, his friends, and his hometown of Coulter.  He helped write the book detailing the history of Coulter and Alpsville and was a member of Mary, Mother of God Parish - St. Patrick's Roman Catholic Church in McKeesport.  Besides his parents, Raymond was preceded in death by his children Raymond Shepherd, Jr. and Joseph Shepherd; his brothers John, Plummer, Frank (Mike), and James Shepherd; his brother-in-law George Haines; and his great-grandson Frankie Rivera.  He was a loving husband to his wife of forty-five years, JoAnn (Champ) Shepherd.  Raymond is also survived by his daughters Michelle (Dave) Skarzynski, Estelle (Barry) Minkel, Stephanie Shepherd, and Jean (Todd) Shepherd; his grandchildren Julie, Daniel, Elaina, Sean, Allison, Ryan, Dalane, Todd, Jr., and Grace; his great-grandchildren Ronan, Maeve, Emery, and Tomás; his cherished sister Carol Haines; his sisters-in-law Janet and Theodora Shepherd; and also nieces and nephews.

Friends will be received in the Daniel F. Bekavac Funeral Home and Crematory, 4504 Walnut St., Versailles Borough, McKeesport, PA 15132 (412-678-3454), on Sunday, July 18, 2021 from 1 PM to 8 PM.  A Mass of Christian Burial will be held on Monday, July 19, 2021 at 11 AM in St. Patrick's Church, McKeesport.  Procession and burial will follow to Bigley Family Cemetery, Coulter.  Memorial contributions in Raymond's name should be made to the Bigley Family Cemetery, c/o the family.  www.bekavacfuneralhome.com